Sprite is the base class of all display classes and has no visual representation. It’s the main construction element and used to create display hierarchies. Sprites can have other sprites as their children and these children inherit properties such as position, scaling, and transparency from their parent sprite. Hierarchy is an important feature in graphics - when you move your parent sprite, all the child (and grandchild) sprites also move simultaneously. Here are some examples:

Sprites can have only one parent. Therefore if you add a child object that already has a different sprite as a parent, the sprite is removed from the child list of the other sprite and then added to this sprite.

When Gideros starts, the display list hierarchy contains one item (the global Stage instance) only and we can add more:

Texture class is used to load an image file and holds the data stored in the image file. The Bitmap class inherits from Sprite and wraps a Texture object for on-screen display. By separating image display (Bitmap) from data (Texture), it’s possible to create many Bitmap objects simultaneously display the same Texture object each with its own display characteristics.

What is a Texture Atlas?

There are two main reasons for using a texture atlas instead of many independent textures:
1. Texture atlases usually consume less memory. To use an image as a texture, its width and height always have to be a power of two. Gideros automatically increase the texture size to conform to this rule. For example, an image with dimensions of 100x200 becomes a texture with dimensions of 128x256 in memory. That’s where the texture atlas becomes handy. Texture atlases usually have power-of-two dimensions and therefore don’t need to be enlarged.

2. Rendering from a texture atlas is usually faster. Each texture is bound to OpenGL just before rendering it and binding is a costly operation. Using texture atlases instead of individual textures helps in reducing bind operations


Dynamic Creation of Texture Packs To create a texture pack dynamically (at run-time), create TexturePack object with an array of file names of textures:

Gideros loads and packs these images fast and gives you a ready to use texture pack. After creating your texture pack, you can display it easily since it's also a texture in itself:

Note: Gideros uses an algorithm called MaxRects to pack the textures. This algorithm is considered as one of the best packing algorithms in terms of speed and efficiency. If you are interested, you can find the details of MaxRects algorithm at http://clb.demon.fi/projects/even-more-rectangle-bin-packing


Getting Texture Regions from Texture Packs To get the texture region from the texture pack, you need to call the name of the image:

Automatic image resolution is directly related to automatic screen scaling. For example, if your screen is automatically scaled by 2, then using the double-sized image is the best choice in terms of quality and efficiency.

Open the project “Hardware/Automatic Image Resolution” to see automatic image resolution in action. Run this example multiple times by selecting different resolutions on Gideros Player such as 320x480, 640x960, and 480x800. As you can see, for the different resolutions, the original 200x200 image or high-resolution variants (300x300 and 400x400) are selected and displayed automatically.

Now right click on the project name and select “Properties…” to understand how we configure automatic image resolution parameters: 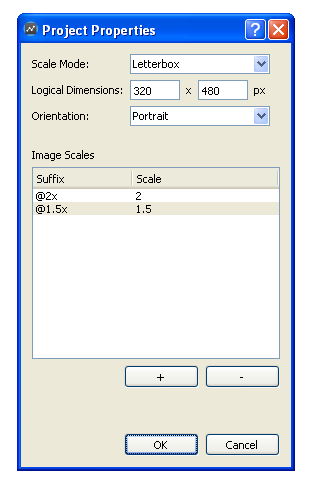 So if you have a base image with resolution 200x200 with name “image.png”, you provide these 3 images:

and let Gideros pick the appropriate one.

and provide alternative images with suffix “@half” as half-resolution of the original ones.

Most applications and games have different scenes (e.g., menu, scoreboard, game levels, inventory, end-of-game, etc). A transition from one scene to another is usually started by user input or some other event. These transitions typically consist of the following steps:

High-level scene management functions aren’t provided directly in Gideros but the Gideros team has released a “Scene Manager” library (see: https://github.com/gideros/Scene-Manager) that can be used as is or that can be modified and extended to by the user (it’s licensed under the liberal MIT license). The library includes a demonstration Gideros project that shows many of the available built-in transitions (a demonstration video can be found on YouTube: http://www.youtube.com/watch?feature=player_embedded&v=KQMSHOMInQU).

Create a class for each of your scenes (and preferably put them into separate .lua files):

Create a SceneManager instance passing a table with scene names as keys and your classes as values:

Change between scenes with function SceneManager:changeScene(sceneName, duration, transition, ease) like so:

SceneManager dispatches events as it makes the transition from one scene to another (enterBegin, enterEnd, exitBegin, exitEnd). You can register to listen for these events to begin/end your animations, clear your timers, save the scores, etc.

The following code shows an example scene (“MyScene”) and how you might use the “enterEnd” and “exitBegin” events:

Gideros supports for both bitmap fonts (also known as BMFonts) and TrueType Fonts. Font and TTFont classes are used to load fonts and TextField class is used to create display objects for text display.

You need to use an external tool to create bitmap fonts. Gideros Font Creator is one of these and you can find it inside the installation directory. Other noticeable bitmap font creator tools are:

Usually, these tools have the ability to enhance the bitmap fonts with effects like shadows, outlines, color gradients, and so on. And this is the main advantage of using bitmap fonts.

After creating the image (e.g. font.png) and the descriptor file (e.g. font.txt or font.fnt), you can load the bitmap font as:

And after loading the font, you can create a TextField object to display a text as:

Finally you can add the resulting TextField object to the stage to display it:

TextField inherits from Sprite class and therefore has all the properties and capabilities of sprites.

Bitmap fonts are fast to render and fast to update. But they should be created with a tool beforehand and therefore the size of any bitmap font is ﬁxed. Also, you need to create separate bitmap fonts for each automatic image resolution suffix (e.g. @2x, @4x, etc.) and Gideros automatically selects the best bitmap font according to your scaling.

It's possible to cache TrueType font glyphs into an internal texture so that updating the font text won't be a slow operation anymore. For example, to create a TrueType font with all uppercase characters:

Note: If a character is not found in the internal cache, it simply won't be displayed.

In Gideros, TextField objects are positioned according to their baselines:

The ascender of a font is the distance from the baseline to the highest position characters extend to. So that...

Gideros provides a Shape class for drawing primitive shapes. It is similar to the drawing API found in Flash although at the moment it only has a subset of Flash’s capabilities. Since the Shape class inherits from Sprite (which itself inherits from EventListener), instances of the shape class can be rotated, scaled, positioned on the screen, listen for and dispatch events - basically anything that Sprites can do. See the chapter on Sprites for a full list of inherited capabilities.

The unique functions added by the Shape class are:

One question that you might ask is: Why draw using this primitive API? Wouldn’t it be better to use some other authoring environment (e.g., Photoshop, Inkscape, Gimp) then import the image as a Texture? In most cases, an authoring tool is the right answer. However, there are cases where you don’t know which graphics you need in advance:

The standard cartesian coordinate system that everyone learns in school consists of an origin point (x=0, y=0) which is often drawn in the center of a page. The x values increase to the right horizontally and the y values increase upwards vertically (i.e., x values are negative to the left of the origin and positive to the right, y values are negative below the origin and positive above).

The origin point in the Gideros coordinate system is in the upper left-hand corner of the screen with an inverted y-axis (i.e., y values are negative above the origin and positive below the origin). The x-axis is the same as the standard cartesian coordinate system. {ISSUE: Current origin point in gideros desktop player seems to be 1,0 -- posted issue on gideros forum}

A pen & paper analogy is often used to describe the drawing approach used by the Shape class. The “moveTo” function can be thought of as lifting a pen off the paper and moving it to a different location without drawing anything. The “lineTo” function draws a straight line from the current pen location to the destination location.

The overall flow for drawing with the Shape class is:

Our first drawing will be a simple horizontal line from x=100,y=100 to x=200,y=100 as shown in the following figure. We’ll use the moveTo function to move to the first point, then the lineTo function to actually draw the line. 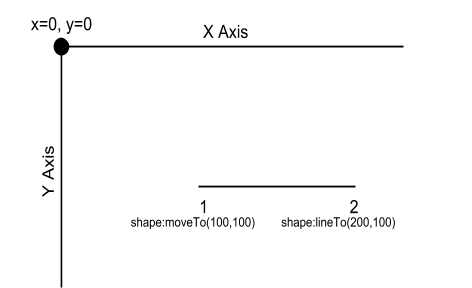 Here’s the code to draw the line:

Some things to note about this code:

This example is similar to our line drawing program plus 1 additional line to fill the rectangle and 3 additional new lines to draw the right, bottom, and left sides of the rectangle. 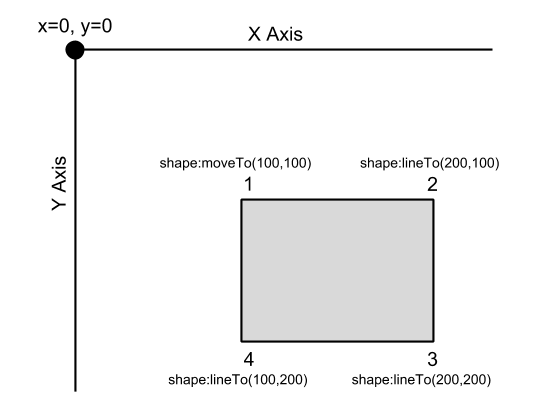 There are a couple of simplifications that we can make to the rectangle code:

The following code uses these two simplifications to draw a polygon from an arbitrary list of data points:

We can change path to have as many points as we’d like and the above code will draw the closed polygon.


Let’s change our previous polygon example so that the rectangle will stay centered at its center point (150,150) if rotated or scaled. The code will need the following two changes:

We can make these changes by modifying the first few lines of our previous example like so:

We’ve used setLineStyle and setFillStyle in our examples, but the lines and rectangles that we’ve drawn so far are pretty boring. This section provides more details on these two functions.

Shapes can be unfilled, filled with a color, or filled with a texture. The first argument to setFillStyle determines the fill type:

The following illustrates how to use the three different types of fill styles:

There are two important things to note when using texture fills:

Simple paths such as circles, triangles, rectangles have a well-defined and obvious “fill area.”. For complex paths (e.g., concentric circles, shapes with intersecting lines), multiple choices can be made as to whether fill an area. The Shape:beginPath function takes an optional winding argument that determines how the path will be filled (the default value for the argument is Shape.EVEN_ODD). To determine whether an area should be filled, the following two rules are available within Gideros:

For example, consider a simple path such as a rectangle: a line started from “outside” the rectangle will either cross 0 edges or 2 edges. Since the line crosses an even number of lines, the area should not be filled using the even-odd rule. The area wouldn’t be filled with the non-zero rule either: the line would either cross 0 edges (count would be 0) or two edges -- one edge drawn in one direction, the other edge drawn in the opposite direction (the count would be 0). If a line is started inside the rectangle, the line will intersect one edge (an odd count for the even-odd rule, and a count of either -1 or 1 for the non zero rule).


In can be confusing to decide whether an area should be filled but thankfully examples of different winding rules are easy to find since these two winding rules are used in flash, SVG, postscript, and many other drawing technologies.

Note: Currently there’s no way to set the animation speed, however you can prepare different animations for different speeds like:

This way, you can position your MovieClip wherever you want (e.g. running player, walking player, flying helicopter, etc).