The objective in a space shooter game is to destroy enemy spaceships, so lets work on that part. There are two kind of ships in the game:

However both kind of ships have common characteristics: armour, cannons, they can be hit by bullets, etc. Since we want to reuse code as much as possible, we'll create a Ship class to handle common features. But first lets define the actual ships we will have in our game. 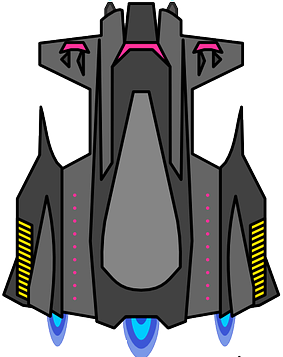 A ship in our space shooter game

Our ships will have a texture, a few cannons, and a certain armour resistance. We'll define them in a lua table. Create a ships.lua file and insert the ships description:

Each key in our table is a ship type. I choose single letter type names to make it easier to create our levels later. Each entry describe the ship characteristics:

We'll want to arrange our ships on a grid when they arrive on screen, as if they were part of a wing. To do so, we need our ships to be scaled appropriately to fit cells. That is what the relative size field is for, it will tell how many cells this ship is supposed to span. The final line of the above code block specifies the size of a grid cell. We computed it so that five small ships can span the screen width, but divided by 6 to leave a bit of margin.

We'll use the same technique as the Background, and have our Ship class extend Gideros Pixel. It will look like this:

The 'Ship:init' method will look up the given ship type from the ships definition list, defaulting to the "Z" type if no type was supplied, then initialize itself from that ship description. As a last step of its initialization, it will register itself to a global list of actors in the game. The idea here is to have each ship take care of itself without cluttering the main game loop. For now, append the above code block to your ships.lua file. We will complete this skeleton shortly.

For now switch back to main.lua file, some changes must be made already. Our game loop must call the 'tick' method of each object in the ACTORS list. While we are at it, let's create the collision world with cbump plugin, we will need it shortly. Don't forget to add the 'bump' plugin to your project settings!

Add this early in your main.lua code:

And the following code inside your game loop:

The game loop code should look like this now:

Our code should still run so far, but we won't see anything new. Lets complete our ship code and show it on screen.

Our 'tick' method will update the collision world according to our ship position, and fire the cannons if appropriate.

We must not forget to remove our ship from the collision world when it gets destroyed. Add the following lines inside the 'Ship:destroy' method.

We have done a lot of hidden work in this chapter, to see a bit of evolution from the previous chapter, lets add our ship on screen.

In main.lua add the following code at the end:

With this code, we are declaring the enemy layer, the player ship and the bullets layer. We place our ship centered at the bottom of the screen. Now we just need to add our ship images to our project (under the gfx folder), and see the result.